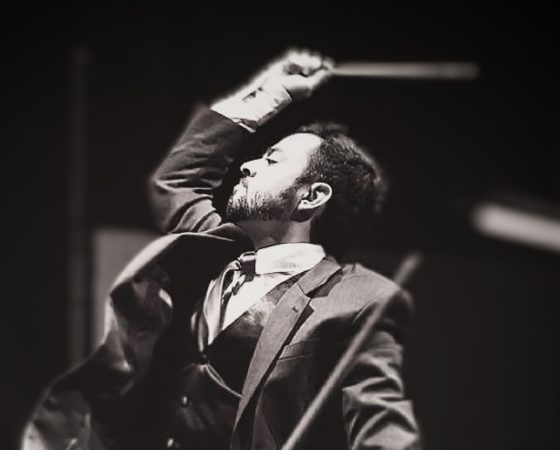 Camilo Giraldo began his training as a violinist in Medellín with the maestros Ruth Stella Alvarez and Hans Jurjaanz and continued in Paris with Tatiana Afanassief, Christophe Bruno and Terlecky Veronique. He then pursued a training as a conductor in Lyon and Moscow with maestros Philippe Fournier, Jean-Pierre Prajoux and Viacheslav Valeev.

He developed his career as a violinist, soloist and conductor with the Medellín Philharmony Orchestra, the Orquesta Sinfónica de Antioquia, the Orchestre Symphonique Confluences, the Orchestre de la Cite de Paris, the orchestra of the P.I Tchaikovski State Conservatory in Moscow and at the Ippolitov-Ivanov Institute, as well a other musical formations and chamber music ensembles. He is the composer, producer and editor of the film score for the colombian movie Me Llevaras en Ti.

He is also trained in commercial administration, coaching and PNL, for which he is recognized as international speaker. He aims to integrate these disciplines in order to develop and lead international academic and social change projects through music. He is currently the manager of Entre-Arte s.a.s and codirector of the symphonic corporation Confluences Medellín Columbia.